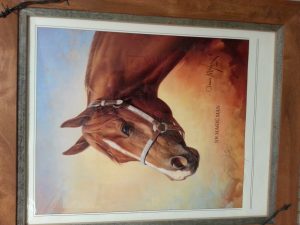 After 20 years in the newspaper business, I learned I like writing personal columns better than anything. Who knew I could start a blog and write nothing else?
So here it is. If you read my newspaper columns, welcome. If not, welcome.
Here’s a story I was thinking about recently because I was framing a signed Oren Mixer print. Nick McNair gave it to me.
When Nick was being inducted in Oklahoma’s Quarter Horse Hall of Fame, I did a story about his horses. It was not easy and took several helpers. In the process I met Nick’s brother Jake. He provided pictures, including a priceless one of Nick steer wrestling on Baby Doll. Jake told me about the first time Mixer came to visit Nick at his place in Big Cabin, Okla.
“Like cowboys do, when Nick bought that place, the first thing he did was build a nice barn,” Jake said.
“He’d had a new doublewide moved in there, but there wasn’t a thing in it. Then he told me Oren Mixer was coming to visit.
“I was beside myself. There were no beds. Nick paid no attention and I got to thinking how awful it was to have a famous artist visit and not even a bed for him.”
So Jake started bringing in furniture. Furnishing the house, especially the bedrooms. Nick paid it no mind.
“So I got it in pretty good shape and I was real proud of myself. And Oren showed up. With his bedroll. Throwed it down in the tackroom with Nick and stayed there the whole visit. Never even went in a bedroom.”
After the story published, turned out Nick liked it OK. One day he showed up with a number of Mixer’s prints, many of them signed.
“Pick you some of them out,” Nick told me.
“Nick most of these are signed,” I said. “You don’t want me to take those.”
“Help yourself. I can get him to sign more. Besides, he painted my horse you know, so I’ve got an original on my wall.”

15 thoughts on “All personal columns; all the time”