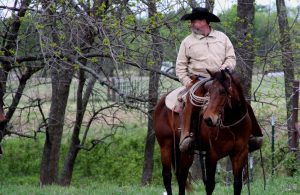 Mike has a horse he calls Whoabay. That’s because when he was breaking him he ran off…a lot. Saw boogers everywhere.
Mike was riding in the feedyard when he bought him. “I rode him and nothing else for I don’t know how long,” Mike told me.
“In the morning when I’d go to get him he’d be laying down. So tired he slept laying down. Some mornings I thought he might be dead. I didn’t care if he was. He got a bed sore from sleeping all night laying down. But he’d still run off if you flapped your leggin.”
In the end it paid off. By the time I met Whoabay, he was a dandy mount. Handy for any cow work. Hold and sort, rope anything from a big cow in the pasture to steers out of the box. Drag calves to the fire all day.
I loved him from the first and Mike claims he likes me. Still has his quirks. You won’t be putting on your slicker or taking it off because you can’t stay with him whirling around.
Mike had always told me if you don’t step right off in a hurry sometimes he’ll jump sideways.
Early in my life with Mike I went with my bud Kate Chambers Huddleston to her family’s calf works on the wagon.
I took my beloved Strawboss and Whoabay.
One morning when Tim Zibell started to rope horses for us I called for the bay and told Tim to be easy cause he’s kinda fractious. Tim’s expertise with the horse rope made the whole thing just like roping any other horse.
We had a long day. Big circles to gather, big bunches to brand, then a long drive back to the pastures. Whoabay worked like a champ all day. Never the least shy or misstep. Good to sort, hold the gate and drag. A great partner.
By the time we started back to camp it was probably six o’clock. Kate and I were bringing up the rear and we got to a place where I needed to drag two big panels together to make the gate.
I was tired, I guess I was getting off too slow. Whoabay jumped sideways so far I went flying out of my stirrup and landed on my butt.
Kate almost popped a rivet laughing.
“You’d think he’d be tired,” Kate said.
I’d forgotten Mike told me he might do that. Of course you can never tell when or if – you just have to be ready.
From the first time I laid eyes on that horse Mike said “he’s the brokest unbroke horse I’ll ever own.”
That’s true, but in my experience the best ones have some quirks. You put up with those quirks, and they even endear the horse to you if he’s a good one.
This is a good one.

4 thoughts on “The brokest unbroke horse we’ll ever own”