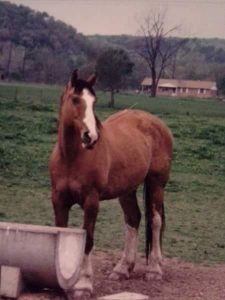 Scott said he got him cause he was stalling in the chute. Scott got him straightened out and the horse ended up bucking at many finals including the NFR.
Of course a big discussion insued about who had ridden, who bucked off and who was glad they never drew him. Keith would have loved being in that discussion. He was part of it even though he didn’t know.
One of the people I might have lost touch with is Benny Barnes. He is one of the best pickup men in any arena. He set Keith safe on the ground many times in the old days. He lives in New Mexico now but thanks to Facebook I get to talk to him from time to time.
He chimed in on the 132 discussion about one year at the ACRA finals. “Cody (Soseby) had him first round and Keith Parker had 100 Moonshine first round. Bucked both of them off. Bareback riders were picking what they wanted (in the draw) for the third round and Cody and Keith picked 132 and 100 to go back in the draw. About half the other bareback riders didn’t want them in.”
You can bet Keith was hoping he’d draw one of them. I didn’t remember which finals that was so I called Keith. Of course he remembered.
“I sure wanted to draw one of them, but I rode that V2 horse of Jack Butrum’s.
“I won a lot of money on that Moonshine horse. You know he’s the one I hung up to at Elkins.”
It was the only time I ever got scared in the 20 years Keith rode bareback horses.
I taught ag at Elkins and for a time I lived on the Treats’ ranch. Randy built a nice arena there with help from me and my kids and we had rodeos as FFA fundraisers. Keith was entered in one of those rodeos when the wreck happened.
“Didn’t Keith Clark own him then?” I said.
“No, Keith had sold him to Sammy Miller by then,” Keith told me.
Moonshine had a dirty trip that night,covering a lot of ground. Keith rode him but it was really humid and he was having trouble breaking his bind. Those of you who rode with Keith or pulled his riggin know what a tight bind he liked.
Meanwhile, Moonshine was running like a deer and trying to drag Keith off on the fence. Somehow, Keith got pitched off away from his hand. I still wasn’t frantic cause Keith was on his feet and running. Keith Clark was picking up one side and his horse just didn’t have the juice to catch Moonshine. Whoever was supposed to be working the other side was never in the picture.
I was standing on the kickboard behind the chute because I always headed Keith’s horses and slapped them out.
I wasn’t frantic because Keith was on his feet.
Then Moonshine slapped Keith against the fence. His head hit and he was knocked out. Now I was frantic. My brother was a limp rag doll tied to a running horse by his hand.
I was crawling into the arena as fast as I could go. All I could think was to head that horse.
Two more great pickup men, Eddie Claybrook and Joe Haraway, were behind the chutes. They saw the situation. Before I knew it, when Moonshine passed close to the bucking chutes, Eddie bailed off on the horse’s head. Joe was right there like a wild horseracer to grab hold once Eddie slowed the horse down. Keith was out cold through the whole thing.
Moonshine stepped on on Keith’s ankle. It was the worst Keith ever got hurt.
“You know, he was dirty with me that night and with anybody else from then on,” Keith said, “but after that when I drew him, he’d buck right there. He wouldn’t leave the gate 20 foot. He must have remembered that wreck.
“And you know, he’s the last horse I drew in my last finals. I drew him in the short round of the ACRA finals. Them boys reminded me he’d thrown me off there before. I said he won’t throw me this time.”
He didn’t. Keith won the round on him, won the average saddle and the year-end saddle.
Keith would always want the rough ones in the draw.

One thought on “Put him in the draw”