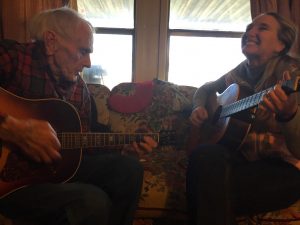 I have been richly blessed with two families. The one as a happy accident of birth I was born into, and the one who took me as if I was their own. That one is the Cunninghams.
We met in stages. First I met Dearl. He was in school at the University of Arkansas when I got there. He was on the livestock judging team with my best friend. Next I met Joe Bob. I taught ag in Arkansas where show lambs had a weight limit. There was no weight limit in Oklahoma, so he bought some of our fall show lambs to carry over for spring jackpots.
Time rocked on and I ended up in the newspaper business at Jay where Dearl taught. I got to cover all the accomplishments of his FFA members.
Then I went to the Pryor newspaper where I covered all of Mayes County. Joe Bob taught at Locust Grove. Now I could cover all his FFA members accomplishments, which included his own kids and his brother Ronn’s. Ronn was the auctioneer at the premium sale at the county fair.
Those connections led me to Dan and Gearl Dene, parents to Dearl, Joe Bob and Ronn, grandparents to a bunch, great grandparents to a growing bunch, friends to many and special people to me.
I first visited the ranch on Rose Prairie when Dan and Gearl Dene were selected Mayes County Farm Family of the year. I did a story for the newspaper, but what I got was my second family. I learned how the ranch was put together starting with Gearl Dene’s family. It’s 100 years old and is being named a historical Oklahoma ranch this year. Dan took me all over it and we talked cows and horses. Well, mostly horses.
I am sure Dan read every word I ever wrote in the newspaper. He wrote letters to the editor about my columns and articles. Later when I was the editor he sent poems I printed on my ag pages. Some were for me and some were about me. Once he sent one in a Christmas card which included drawings by Ronn’s son Chance. That one is framed on my wall.
Hanging in my kitchen is a sign he made for me that says ‘shoot low sheriff, I think she’s riding a shetland.’
Both of us had played in bands and we were like-minded about music, so we played together even when arthritis made it tough for him. We always played Lilly Dale, no matter what direction our jam took.
More than 20 years after we met, Dan’s heart betrayed him. Suddenly that long time seemed so short. We needed more time to tell stories. More time to play music. More time to watch kids show at the fair together. There were still things to talk about. There should be more time to sit in companionable silence on Rose Prairie.
But time ran out. Time here, anyway.
We’ll see each other again some day where we will be whole and young and jump mounting the tallest horse will be easy. There’s a saying cowboys use: “you’ll do to ride the river.” It’s the highest compliment. If I ever had a kindred spirit, it’s Dan.
I will miss you until then Dan, but don’t give up on me. I’ll be there, where the grass is lush and green and stirrup high.
Riding the range
Is a welcome change
From her day job down in town
And the creake of the saddle
When she’s gathering cattle
Sure is a comforting sound
On an ole bay horse
She’ll stay the course
And make that old ranch a hand
With the good grass growing
She’ll feel good knowing
It’s the best job in the land.
Dan Cunningham
2011

One thought on “You’ll do to ride the river”